Outline
It was a circular walk of about 4 miles, 1 style, flat terrain. We followed the canal along a very quiet tow path to the weir upstream of Walsham Lock. From there, we walked across flat terrain to near Ripley, before crossing the Common towards the rear of the RHS site. We continued along the public footpath that passed through the Garden, having sight of the new glasshouse, and passed alongside the arboretum, towards Wisley Common. We continued along the Common edge, before crossing Wisley Lane and skirting round the edge of the golf course. From there it was a short walk back to the pub.
The Walk
10 members and wives met at Pyrford Lock on the Wey Navigation at the start of our October walk. Once more, we were blessed by good weather. On entering the towpath, we stopped at the National Trust information panel, which explains that the “Navigations” are an early (17th century) attempt to improve local access for boats, by building short lengths of canal to by-pass those river sections which were previously un-navigable. Currently, the combined course of these works and the river is now maintained by the N.T, to provide a haven of calm, such that one might assume that urban Surrey was far away (pity about the cyclists, which we had to dodge as we made progressed along the towpath).We stopped to look at a plaque on a canal-side building which is recorded as being the residence of the Irish poet John Dunne, before arriving at Walsham Lock, which is preserved as originally built with earth sides, but apparently not used now. 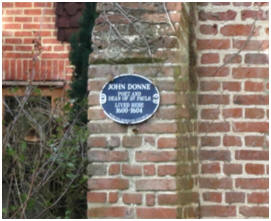 We then arrived at the weir which maintains the level of this section of the canal well above that of the river below. 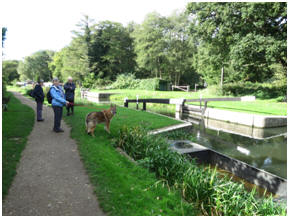 From there we made our way across low-lying land, to Ripley Common with its woodland, and on to where the route took us behind Wisley RHS garden and gave us a good view of the new Glasshouses.

Several members said that they must put the Gardens on their visiting list! We crossed the Wisley lane on to Wisley Common, not so quiet here as we were close to the M25. 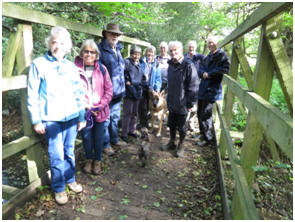 The final stage of our route was around the edge of the Wisley golf course. After watching a group of players waiting to “tee-off” (or were they waiting for us?), we passed through an avenue of Dogwood with their characteristic red trunks, to return to our start point, Pyrford Lock and the Anchor Inn where most of us had lunch. The weather was so good that several of us decided to complete a pleasant day with a visit to Wisley Gardens.
We are always ready to welcome new members to our group, so if you feel like some good company and some gentle exercise, why not give us a try? Watch the web-site for details of our next walk.
Good walking, Malcolm Davis