The after lunch talk November 3rd was on the Crimean war given bv our guest speaker Paul Whittle and was much as is given in following text.
In a conflict that claimed over 250,000 dead and countless more injured, Britain and France allied with the Turkish Ottoman Empire against Russian military expansion. Paul’s talk- illustrated with plentiful maps and contemporary images – described the causes of the conflict, the land battles, including the famous Charge of the Light Brigade, and the devastating siege of the mighty Sevastopol naval base
The war opened in the Balkans, when Russian troops occupied the Danubian Principalities, until then under Ottoman suzerainty and now part of modern Romania, and began to cross the Danube. Led by Omar Pasha, the Ottomans fought a strong defensive campaign and stopped the advance at Silistra. A separate action on the fort town of Kars in eastern Anatolia led to a siege, and a Turkish attempt to reinforce the garrison was destroyed by a Russian fleet at Sinop. Fearing an Ottoman collapse, France and Britain rushed forces to Gallipoli. They then moved north to Varna in June, arriving just in time for the Russians to abandon Silistra. Aside from a minor skirmish at Constanța, there was little for the allies to do. Karl Marx quipped that “there they are, the French doing nothing and the British helping them as fast as possible
Frustrated by the wasted effort, and with demands for action from their citizens, the allied force decided to attack the center of Russian strength in the Black Sea at Sevastopol on the Crimean peninsula. After extended preparations, the forces landed on the peninsula in September 1854 in an unopposed landing and made their way to a point south of Sevastopol. There they took part in a series of successful battles. The Russians counterattacked on 25 October in what became the Battle of Balaclava and were repulsed, but at the cost of seriously depleting the British Army.

Charge of the Light Brigade was a charge of British light cavalry led by Lord Cardigan against Russian forces during the Battle of Balaclava on 25 October 1854, in the Crimean War. Lord Raglan, overall commander of the British forces, had intended to send the Light Brigade to prevent the Russians removing captured guns from overrun Turkish positions, a task well-suited to light cavalry. However, due to miscommunication in the chain of command, the Light Brigade was instead led on a frontal assault against a different artillery battery, one well-prepared with excellent fields of defensive fire.
Although the Light Brigade reached the battery under withering direct fire and scattered some of the gunners, the badly mauled brigade was forced to retreat immediately. Thus, the assault ended with very high British casualties and no decisive gains.
A second counterattack, ordered personally by Nicholas, was defeated by Omar Pasha. The front settled into a siege and led to horrible conditions for troops on both sides. Smaller actions were carried out in the Baltic, the Caucasus, the White Sea and in the North Pacific.
Sevastopol fell after eleven months, and formerly neutral countries began to join the allied cause. Isolated and facing a bleak prospect of invasion from the west if the war continued, Russia sued for peace in March 1856. This was welcomed by France and Britain, as their subjects were beginning to turn against their governments as the war dragged on. The war was officially ended by the Treaty of Paris, signed on 30 March 1856. Russia lost the war and was forbidden from hosting warships in the Black Sea. The Ottoman vassal states of Wallachia and Moldavia became largely independent. Christians were granted a degree of official equality, and the Orthodox Church regained control of the Christian churches in dispute. 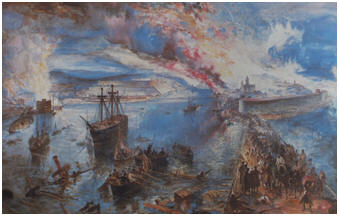 The Fall of Sevastopol September 1855

The Crimean War was one of the first conflicts to use modern technologies such as explosive naval shells, railways, and telegraphs. The war was one of the first to be documented extensively in written reports and photographs. As the legend of the “Charge of the Light Brigade” demonstrates, the war quickly became an iconic symbol of logistical, medical and tactical failures and mismanagement. The reaction in the British Isles was a demand for professionalization, most famously achieved by Florence Nightingale, who gained worldwide attention for pioneering modern nursing while treating the wounded.
On 21 October 1854, Florence Nightingale and the staff of 38 women volunteer nurses that she trained, including her aunt Mai Smith, and 15 Catholic nuns were sent to the Ottoman Empire. They were deployed about 295 nautical miles (546 km; 339 mi) across the Black Sea away from Balaklava in the Crimea, where the main British camp was based.
Nightingale arrived early in November 1854 at Selimiye Barracks in Scutari (modern-day Üsküdar in Istanbul). Her team found that poor care for wounded soldiers was being delivered by overworked medical staff in the face of official indifference. Medicines were in short supply, hygiene was being neglected, and mass infections were common, many of them fatal. There was no equipment to process food for the patients.
Over 60% of casualties in this war were due to disease and sickness followed by poor medical attention until Florence Nightingale arrived and made the much needed improvements to medical care. Battle field casualties were comparatively light by comparison.
Of later days there has been much made of the activities in the medicare by Mary Seacole, however in the opinion of our speaker Paul Whittle her contribution was much more as a Business Women than that of a Nurse.
To conclude there was a fascinating look at the Crimea today, where is the naval base of the Russian Black Sea fleet.
David Rich