A visit to the house was arranged by the Surbiton Probus and it gave an insight into the privileged of the mid 19th century. The house is Victorian, Grade II listed, and is set in four acres.
It was originally built in 1860’s for banker, Hugh Hammersley and extended 1884-6 by George Devey for George Grenfell Glyn, Lord Wolverton. The House was sold through many owners who extended its grounds as well as setting up flower gardens and nurseries. It was acquired by ICI in 1954 and used as an executive management centre until 1998. ICI sold of most of the grounds to fund improvements to the House. It was then sold to its current owners for use as a conference centre, wedding venue, as a restaurant and for funeral wakes. The resulting gardens are now smaller having been replanted to represent earlier shrubs and trees.

The House, our meeting room and the grotto.

It was the House that enjoyed the privileged visitors including Edward 7 and his mistress who met and sat in this part of the gardens.

An explanation of the garden by the Head Gardener of the replanted garden. 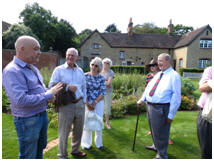 Two notable visitors at and near Warren House. 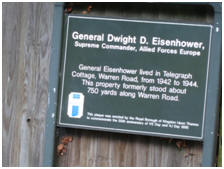